You are here: Home / Spiritual Growth / You’re Not Everyone’s Cup of Tea and That’s Okay. 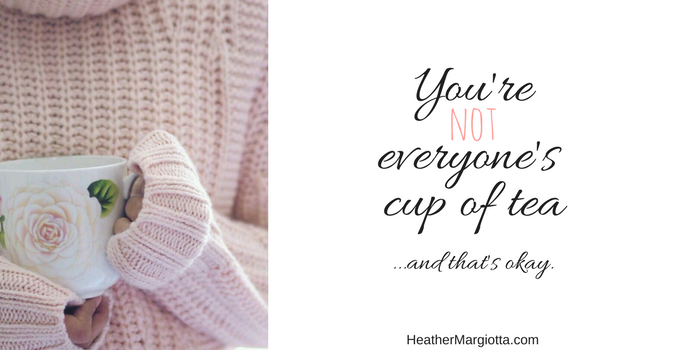 You’ll never be everyone’s cup of tea and that is okay.

Up until my early twenties it really bothered me if someone did not like me. I would find myself doing and saying things to gain the acceptance of others. I would be so upset that there would be a reason for someone to not accept me.

I remember being in elementary school where we were graded on our behavior and relationships with other kids in the school. I would cry to my parents that I didn’t get A’s in those areas and I was convinced that the kids and teachers did not like me.

I remember in high school dressing a certain way and acting a certain way so that certain people would like me. I had a group of girl friends who required me to dress a specific way and if I were to dare to dress differently, they would remind me that only they could dress that way. If I didn’t listen, they would stop being friends with me. The sad part is, I actually listened. I remember casually telling a friend about an new outfit I was going to wear the next day. That night, two of my friends three way called me to tell me that I wasn’t allowed to wear it. I didn’t wear it because I so badly wanted them to be my friend.

I know these are all examples of when I was a child and now as an adult I can look back, laugh, and roll my eyes wondering why I ever cared so much. But the truth of the matter is, how many of us still feel that way as adults? It may look different but it feels the same.

When I was in my early twenties I started to crave acceptance in my career. I would find myself craving “to be liked” by certain leaders because I was new in my journey in ministry. I was expected to act and do things in a way that was not true to who I was. But, I did it anyways because I just wanted to be told that I was doing a good job. I would say and do things that I personally did not agree with because I cared more about the leaders above me accepting me more then staying true to who I was.

This desire to constantly please everyone around me to be liked put me in situations that I easily could have avoided. It caused me to be misunderstood many times. I spent way too much time worrying about what everyone else thought of me and allowing that to dictate my actions and choices that I never showed people who I truly was and shared how I truly felt.

After spending the beginning part of my twenties wrapped up in this, something changed. I became more comfortable with who I am, what I think, say and do. I started to trust that I know what I am talking about, sometimes 😉 As I grew as a wife, a mother, a friend, and a follow of Jesus, I grew in self confidence and fulfillment in Jesus. I realized that I should care more about what Jesus thinks of me and my choices/actions then I should others. I started to look to Jesus more for acceptance then others.

Every once in awhile I will catch myself thinking the way I use to. I remember about a year ago I was talking to a close friend of mine. We had found out that someone stated that they did not like her. I was shocked because this person was always so kind and loving to my friend. When I asked my friend how it made her feel and if it bothers her that this person said that, she looked at me and simply said; “Why does everyone have to like me?”  I realized that someone being hurt by you is different then someone just not liking you.

1 Corinthians even warns people against becoming slaves to people and their standards. Of course, having standards is important. However, whose standards do you hold yourself to? Jesus or other people?

Lindsay from Sparrows and Lily blog has said, Be you and don’t try to be somebody else just to be accepted or fit in. The world has a lot of people to get to know and some of them really want to meet the real you. No matter what you do or who you try to be, there will be people who may not like you. But the world is filled with people who will love you deeply and fiercely. Those are your people.

« A Conversation with God
Trusting God’s Plan and His Path »