You are here: Home / Spiritual Growth / When Fear Attacks 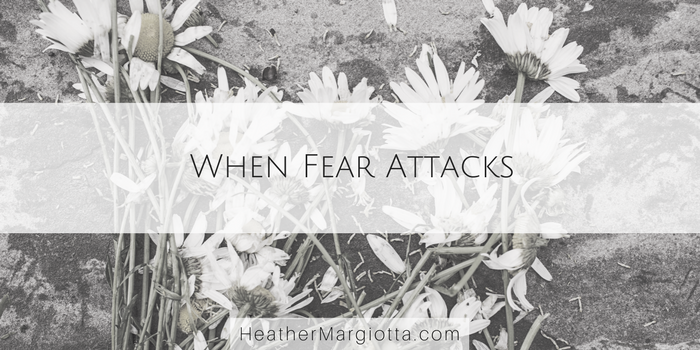 This past summer a friend and I took our two little ones to a park near our homes. We met at my house and walked to the park that we both have gone to many times. When we got to the park it was just us and our kids ran around playing while we chatted and caught up on life.

About half way through our time there, a car pulled into the parking lot and parked facing right where we were. My friend and I noticed a middle aged man sitting in the car by himself. My friend immediately questioned why a middle age man would be sitting in this small neighborhood park by himself. Needless to say, he gave her the creeps. I have learned to not only trust my gut instinct but to also trust others. While our kids were playing we noticed the man filming our children from his car. We quickly looked at each other and said, “Are you seeing this?” My friend told me that she has a relative that lives right outside the park and that we should just walk to their house. We put our kids in the strollers and packed up.

Right after we got packed up and started walking towards the exit, the man started his car like he was going to leave- like he was going to follow us. The way the park is set up, we had to walk through the parking lot to get to the exit, which is exactly where this car was parked. Again, it is a small park so the parking lot is even smaller. When we looked over at the car after it started, the man laid straight back so we could not see him. I took out my phone and started taking pictures of the car and wrote down the license plate number. The car was still running but not pulling out while we snapped away. We then started walking out and I told my friend we should call the police. We were right by the exit and the car pulled out of his spot, and drove really fast past us, and turned out of the park and onto the busy road. While he drove past us, he turned the complete opposite direction and covered his face with his hands. My friend was already on the phone with the police and within 2 minutes there were two cop cars in the area.

We were both very spooked and concerned. I called my local police station later on that day and asked if anything happened. They told us that they did not catch the man in the area. I asked why they couldn’t search his license plate number that we gave them and track him down. They told me that they couldn’t do that, that they would have to find him in the area to legally be allowed to questioned him. I asked the officer what he thought about what we reported and he told me that he did not want to scare me but everything we said lines up with sex trafficking. He said to immediately report the car if we see it again in the park. He told me that if I go anywhere with my children and feel scared or concerned to immediately call the police.

I am the type of person who is always aware of my surroundings. My mother taught me to always be alert. I know that if I was not alert and my friend wasn’t either, we would have totally missed the man in the park filming our kids.

Following the day in the park I was overwhelmed with anxiety. I am generally not an anxious person, it takes a lot for me to get overwhelmed or flustered. But this experience hit a nerve for me. I was completely overwhelmed with the “what ifs” and was totally engulfed in fear. What if we didn’t pay attention and he took our kids. What if he attacked us. What if we went alone, like we often do, and had to deal with that by ourselves. What if Chase was kidnapped and I had to wonder if he was alive and fearing the hurt and pain he would be experiencing. I did not leave the house during the day with Chase. I kept thinking about how some sick pervert has a video of my sweet innocent child on his phone. It was the first time that I felt the evil of this world waiting to hurt my son. I stayed home and did not even open my blinds. I was so afraid of someone seeing where Chase lived and taking him.

I thought after a day or two I would be able to shake it off, but it didn’t go away. I was even having bad dreams. Anytime I left the house, I was looking around to make sure no one was around while I got into the car. I did not feel safe until James was with me.

One night I was a friends house and did not leave until late in the night. This was about a week and a half after the park incident. I was driving home and this feeling of fear just started to overcome me knowing I was going to have to get out of my car and walk to my house, alone and in the dark. It sounds so silly now saying that, but it truly was how I felt.

I get home, park the car, and was rushing to grab my purse and run into the house. As soon as I reached to open the door, words of prayer started rushing out of my mouth. I stopped and sat there and was like, “What the heck was that?” I was not thinking of God, I was not thinking of praying, I was focused on getting into the house as quickly as possible. Immediately, I heard God speak to me. He said, “You are being attacked by a spirit of fear. Your spirit recognized it and started praying against it.” I then sat there and realized that everything I had been feeling, thinking, and worrying about was so out of character for me. It was all consuming and could be controlling if I allowed it.

For God has not given us a spirit of fear and timidity, but of power, love, and self-discipline.

I knew that I needed to be released from this fear and proclaim the peace of God over my life. I sat there in my car and prayed. I thanked God for protecting us and prayed for His peace to cover me. I thanked God for breaking this fear off of me. I then got out of my car and walked into my house and I haven’t even thought of the park incident since. There was totally freedom and release from this fear that once consumed me.

“I am leaving you with a gift—peace of mind and heart. And the peace I give is a gift the world cannot give. So don’t be troubled or afraid.

Maybe something happened in life that has caused you to worry and be fearful of things. Maybe it seems like nothing specific happened and you don’t know why you are always worried and experience true fear.

I went back and forth on if I should share this story or not, because it is very raw and real to me. After praying I felt like I need to share my story for many reasons;

Life can have it’s hard moments- but there is so much more to life than just those moments. God wants us to have a rich and full life. If you find yourself relating to this post- please let me know! I would love to hear from you all.

« When Complaining About Motherhood Becomes Sinful
Asking for Prayer: Why Being Transparent Is Important »