You are here: Home / Relationships / Should You Ask Your Friends Personal Questions? The Answer May Surprise You. 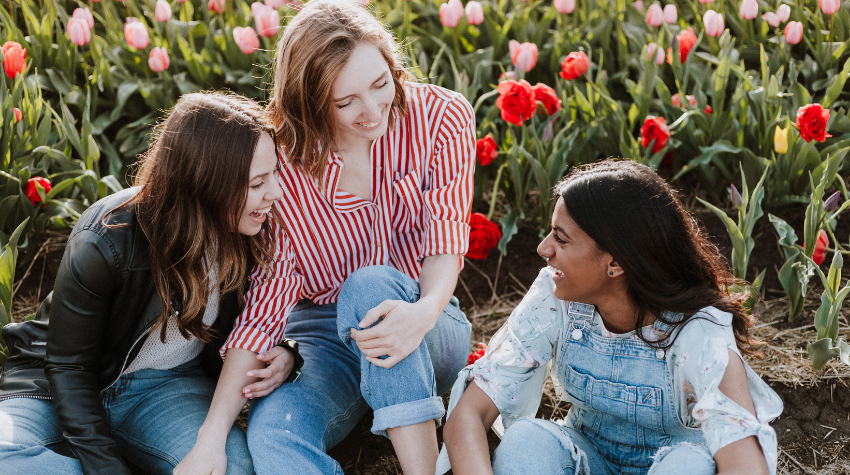 “So, like, when are you going to have a baby? What’s taking so long?”

“You’re so young. Don’t you want to live life a little before settling down?”

I’ve been on the receiving end of those questions and I can tell you about 99% of the time it was extremely uncomfortable. James and I were engaged at 20 and married at 21. Everyone from a hairdresser to the cake decorator, to the random lady at church I never spoke to would ask the same question; “You’re so young, don’t you want to live a little before being tied down?”

How was I suppose to answer that? I’m already engaged and planning the wedding to the man I’m choosing to spend the rest of my life with and I’m supposed to stop that so I could “live a little?” To appease the person asking the question?

Eventually, I came up with the phrase, “If the person you’re marrying causes you to have to settle into a mundane life or hold you back from achieving your dreams, then I suggest that’s not the most healthy relationship. So, yes, then you shouldn’t marry.”

Those types of conversations were super awkward at the age of 20. And they still are.

I had plenty of people asking if James and I were going to have another baby after we had Chase. When we started trying we weren’t telling anyone out of hopes of keeping it a surprise. But, when that time of trying turned into over a year, I was discouraged. Then, in year two, I would cry internally while shrugging it off saying something along the lines of, “Yeah, we’re considering it.”

When I look back at these two examples or any of the other times I’ve been asked uncomfortable personal questions, it’s not the actual question itself that made me feel uncomfortable. It was the timing, location, sometimes the person asking, and often the flippancy in the question.

But, rarely was it ever the question in and of itself.

When being asked about having another child, it was often done in a large gathering or public setting where opening up to share about our struggle to conceive wasn’t something I’d be comfortable with. At times, the person asking was someone I’d consider almost a stranger and it was odder to me they were asking such a personal question. Or, it was asked in such a light-hearted way that giving an answer that carried pain seemed offputting.

However, can I share with you the times where I wasn’t uncomfortable?

When I sat across a friend sharing tacos for dinner and she said, “Can I ask a personal question? You don’t have to answer if you don’t want to, I’m just curious.” Then, proceeded was my sweet friend asking if James and I wanted any more children. It was just us two and she sat there knowing the potential weight of that question and listened as I shared how we had been trying and had no clue as to why it was taking so long.

Or when I had some girlfriends at my house and we were talking about our families and everyone was sharing if they wanted more babies or if their family was complete. I shared my desire for more children and the struggle it had been emotionally to have no answers to why it wasn’t happening.

So, should you ask your friends personal questions? Absolutely. It’s your job as a friend to ask those hard questions. And to do it with a heart full of compassion, a willingness to pray with them, or help in any way if needed.

I get it, it’s confusing.

We’re being told to stop asking our friends when they’re going to have a baby while also being told we need to normalize talking about miscarriages. Some women don’t want to talk about it because it’s too raw, while others find healing in sharing from their hearts. And as the person asking the question, you may not know which side your friend lands on.

Because of that, let’s stop asking in a public setting with acquaintances around, at a weekend bbq, or in the middle of a crowded space. It’s potentially insensitive to their experience and hurdles.

But, please, still ask. When it’s a close friend and done with gentleness, that gives allowance for your friend to give whatever answer is most comfortable for her. Give the time for a long answer or the grace for a short answer.

Life is layered, complicated, and rarely black and white. Haphazardly asking a question with no discernment and full of carelessness is dangerous to the person on the receiving end. Let’s not be so flippant but instead be wise and compassionate.

So, why am I dedicating an entire blog post to this subject?

Because we have friends who are being asked questions publicly that no one is asking privately. Our friends are scrambling to find the answers they’re comfortable with to ensure the conversation can smoothly move along. Our friends aren’t given the proper time or space to share what’s happening in their world.

And because I always want to encourage you to be the best friend you can possibly be. To be the one who loves others so fiercely you can’t help but ask the hard questions. To be the safe person your friend can open up to. To be the friend who thinks about others and their struggles.

But, I’m also writing this for when you’re on the receiving end of those questions. I know how uncomfortable those moments can be and I’m praying those end for you. In the meantime, know those who ask don’t know the pain they could possibly be inflicting, and as hard as it may be, give them grace.

Today, I pray for God to surround you with friends who aren’t afraid to ask you the hard questions because they truly care about what you’re walking through. I pray for the Lord to protect your heart from the mistakes of others. I also pray for the Lord to guide you in your conversations with your friends. For your words to be an encouragement to their heart and your listening ear to allow a time for healing.

Proverbs 27:9 says, “Oil and perfume make the heart glad, and the sweetness of a friend comes from his earnest counsel.”

« Did God Give You Your Struggle To Teach You A Lesson?
You Have A Story And Why It Needs To Be Heard »