You are here: Home / Relationships / Our Story Part One 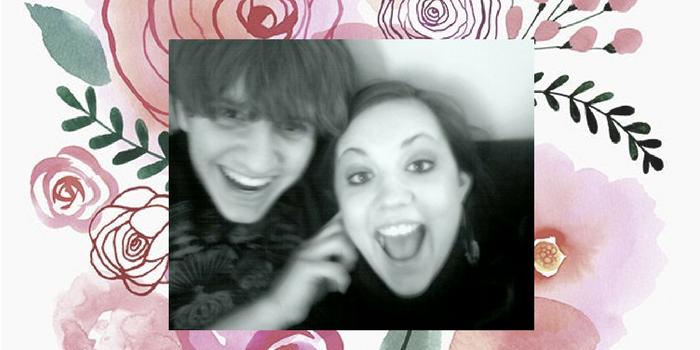 I was 16 when God told me one night that I would marry James.

Next week James and I will celebrate being married for 8 years. So much has happened within those eight years that is seems like a lifetime. After all, we have been together for 13 years.

When I was 15, a sophomore in high school, my best friend in high school, Nikayla, wrote me a note. (Remember writing notes to your friends and you couldn’t wait to get to class to read it?) She told me about this cute boy who sings and plays the guitar at her youth group. She told me that she thinks I would like him because we had the “same sense of humor.”

At this point I was a year into my relationship with God. Most of my friends had dated and broke up way too many times and I just did not want to deal with any of that. So, I prayed and told God that I didn’t want to date around. I only wanted to date who I would marry. So, when I read that letter from my best friend, I didn’t think anything of it.

A few weeks later Nikayla asked me to go to her youth group’s all-nighter on New Year’s Eve. I attended the all-nighter and had a blast. That night Nikayla pointed to James and said, “That’s him. That is who I think you will like.” And, that is where the conversation ended. I did not think anything more about it.

When the all-nighter was over, everyone went out to breakfast together. It was their youth group tradition. So, I went with Nikayla and when we showed up, the last table to sit at was, you guessed it, the table that James and his friends were sitting at. We sat down next to James and tried to make small talk. He wouldn’t look at me, he told me his name was Robert, and he wouldn’t answer any of my questions or engage in small talk. I then figured he was super weird and decided to talk to everyone else at the table. We all ordered breakfast and everyone else and myself had a lovely conversation while James sat silent. Halfway through breakfast James tapped my shoulder. I looked over at him, surprised that he was actually going to talk to me, and he said, “You want to see how many sausage patties I can fit into my mouth at one time?” and then he grabbed his fork and started stacking up 4 patties and shoved them into his mouth all at once. I looked over at Nikayla and gave her a look that totally said, ‘THIS is THE guy you wanted me to meet?” At this point, I knew the kid was a weirdo.

Months went by, I turned 16, and the school year was wrapping up. I would see James randomly through the halls or at lunch but never spoke to him, because I legitly thought the kid was a wack job. At the very end of the school year, Nikayla invited me to hang out with her and her new boyfriend and his friends. Her new boyfriend attended her youth group and she wanted me to go with her since it was their first time hanging out at his house and she didn’t know who of his friends would be there. Being the good friend that I am, I went. 😉 We showed up and besides Nikayla’s boyfriend, all that was there was James, James’  younger sister, and Nikayla’s new boyfriend’s younger sister. The two younger sisters went off together to hang out so it was mainly just James and I and our two friends who were now dating. I was totally expecting the night to we weird and awkward, however, I could not have been more wrong. I could not stop laughing at James. He was hilarious and easy to hang out with. We spent the evening playing volleyball and board games. At the end of the night he offered to take me home since I rode with Nikayla. I said ok since his sister would be in the car with us. (I was not about to be alone in a car with some guy I just met, my mom taught me better).

We talked all the way home and it was easy. It was never awkward and he still made me laugh all the way home. I thought he was super cute and funny. That night while laying in bed I was praying, like I did every night. While praying, I thought about James. I told God that if I wasn’t going to marry James, then I didn’t want to waste my time. I didn’t want to grow to have feelings for him and date just to break up later. As soon as I prayed that, a memory came to my mind. I remembered talking to a classmate about the idea of getting married, who we would marry, how we would meet this person etc. This conversation happened two years prior to this night I was praying. I sat there and thought it was so odd for me to remember a random conversation that I had years prior.

The next day I went to my best friend, Nikayla and her sister, Chaselyn (who I was also very close to)  and told them about my prayer and what I remembered. I asked them if God could speak to me through my past. (I was still very new to this whole idea of God speaking to me). That same day we were at church (at this point I started to attend Nikayla’s church full time) and a lady at the church came up to us and started chatting away. She then shared this story about God speaking to her and how he reminded her of something that had happened years ago and she looked right at me and said, “Isn’t it crazy how God can speak to us through our past?!” I just stared at my friends speechless. I just knew in my heart God was showing me something.

That night I prayed. It was June 16th, 2004. I prayed and told God that I believe him. I believed he was speaking to me. I told God that I knew I was too young for marriage and that if my relationship with James wasn’t to start for a few years for him to protect our hearts. I then asked God when our relationship would start. I felt in my heart, that God spoke the words “three months.” I then said, ok- September 16th, 2004 it is!