You are here: Home / Adoption / When Parenting Looks Different 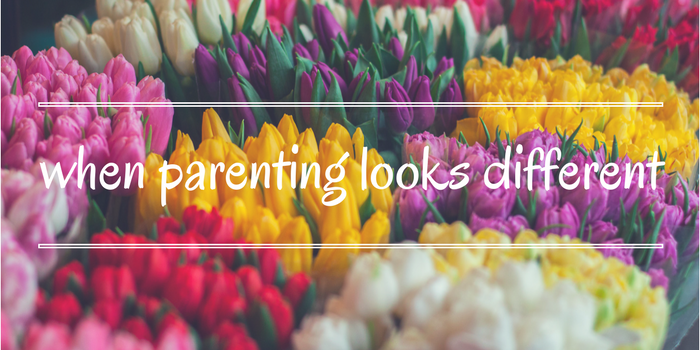 Parenting is a beautiful challenge. Each child is vastly different from another. You can have two children born into the same family and raised in the same house- yet be totally different. That is the beauty of how God made us. It also gives to creative parenting at times 😉

Parenting a child who has been through the foster care system is very different than parenting a child you raised from birth. There are many things that children learn by observation. Some things as simple as putting on clean underwear after you bathe, closing the door behind you, and how to sit at the dinner table. If you think about it, there are so many things children pick up on by watching their parent(s). Often, Chase will say or do something and I literally say out loud, “How did you know to do that!?”

The more complex ideals like hearing a three step command and following through (ex: pick this up, throw that away, and then take this upstairs), problem resolution, critical thinking, initiative, structure, and order are critical life lessons we learn as early as toddler years. As children grow and mature those all develop and grow and mature with them. When a child is in and out of the foster care system their entire childhood… those pieces are lost. The parent wasn’t around to observe from. The foster care system, in my personal experience, tends to do all the thinking for the child.

So, you have a child who was never shown how to take a proper bath by their mother or father. Then, the child goes into care and their just given toiletries and told- go take a bath/shower. They obviously have had baths/showers in the past so they understand the idea of it, but they don’t fully know how to clean themselves. They don’t know to put on clean underwear because no one showed them or taught them. They might not know to put on pajamas because they might not have ever owned some. It’s true. This is real life. We fostered a child (not M) who was 10 (first time into care) and came down with pajamas over his day clothes after showering. He never owned pajamas before and when I told him to put on his pajamas after he showered- that was how he mentally understood to do it. He always put on his dirty clothes after showering and just thought pajamas must go on top.

When doing daily things, many foster kids may come across a common problem that may seem like common sense but, to them it’s not. So for example, the dishwasher is empty and the parent tells the foster child to unload the dishwasher so they can load it- seems simple. The foster child opens the dishwasher and sees the dishes- they then ask if they are clean or dirty. The parent may say- “Why would I have you unload a dirty dishwasher?” OR they may say “Why don’t you look at the dishes and check?” And this happens every single time this child is asked to unload the dishwasher, even after explaining it, every single time.

Adults and children who have been raised in a nurturing home have the capabilities to answer their daily questions or solve the daily problem in front of them- without even thinking about it. Children raised in the foster care system struggle with problem resolution. They often just ask for the answer because that is all they have ever known to do.

Children who have been through the foster care system have experienced trauma on some sort of a level. So parenting those children is going to look vastly different than a biological child. At times it may seem the parent is being extra strict or very laxed. But, what the onlooker may not know is many foster children have triggers and the parents learn how to handle situations to avoid setbacks. Did you know when a child receives abuse and/or neglect their brain develops differently? It often causes children to not have the capability to think logically. So as a parent, we have to be creative. Unfortunately, it causes other onlookers to be confused or think the parent is wrong, simply because they do not understand.

The truth of the matter is, parenting is hard no matter what. If the child is biologically yours, adopted at birth, or adopted from the state- it doesn’t matter. Each child is going to have their own unique personalities and things to overcome. Supporting parents and encouraging each other is key. It is not our job to understand why other parents do what they do, because at the end of the day they know their child best. At the end of the day, it’s their child.  Parenting is very colorful and a lot is learned through trial and error since parents are humans too.

Last night James and I were talking about some of the things we have been dealing with, with M and the adoption finalizing soon. Through our conversation we were just reminded to take it to God. To pray about everything and worry about nothing (Philippians 4:6-7). So this morning during my personal prayer time, I prayed for the parents who parent children that have to deal with things no child should ever have to.  I  prayed they will learn to forgive themselves when they mess up and not be too hard on themselves. Also, I prayed that they will have confidence in the Lord and peace knowing God has given them everything they would ever need to parent.