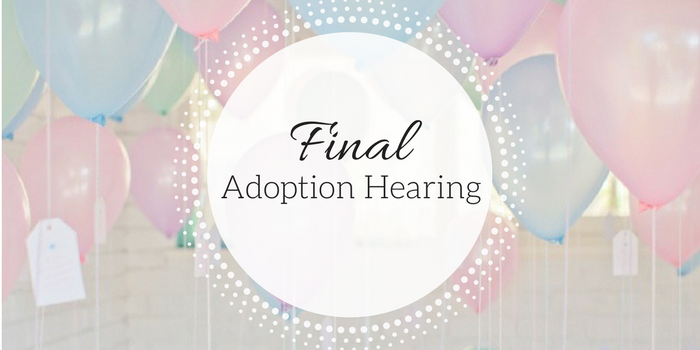 I can’t believe we are FINALLY here. M’s final court date has been set!

August 31st around 6:30pm Ohio time we will Skype with the courtroom in Arizona. We will do everything over skype that we would do if we were there in person. Then, it will be finished.

Just to recap to those who don’t know the whole story:

James and I started fostering M in September of 2013. In May of 2015 his mother’s rights were terminated. She appealed. James and I had already made plans to move back to Ohio and Arizona told us M would move out 30-90 days after us. In August of 2015, four days before we moved, M’s mother recanted her appeal and it was settled. We moved to Ohio and M’s file was transferred to an Adoption Agency. They dragged their feet on everything, made really bad decisions, would yell at me and blame all their mistakes on me, and wouldn’t do what needed to be done to move M to Ohio. Finally, after many calls, emails, tears, and most of all prayer; M moved to Ohio a year after we did.

Shortly after, the agency that held M’s case, had to shut down because they lost their contract with the state. We fell through the cracks and our file was overlooked. Months went by and finally we got assigned a caseworker. She had us fill out a ton of paperwork to finalize, she realized that Arizona was not sending us money to cover certain expenses, got M qualified for adoption subsidy, and helped us find an attorney. While working with the attorney and signing the finalization papers, she discovered that our certificate to adopt had expired. Arizona never sent a request to renew it and since we are no longer Arizona residents- they couldn’t go back and renew it. She went to court and fought hard for us. Pleaded our case that it wasn’t our fault, explained the amount of insane things we had to deal with, and showed our Ohio certificate to adopt. The judge agreed and signed off allowing us to adopt M with an expired certificate to adopt. Then the final date was set!

I have so many emotions about this that I still feel like it hasn’t hit me. It still doesn’t seem like this battle is coming to an end. It has been so consuming and such a part of our everyday lives that it still feel that this is it. That after August 31st, we’re done.

What I do know is, God is faithful. He told me that this year would be The Year of Promise. We would see favor and walk in those promises. This adoption being finalized and having favor on us with the judge to allow us to finalize there- is proof of God’s word on our lives.

This is only the beginning of God’s promises.