You are here: Home / Adoption / An Adoptive Child’s Privacy 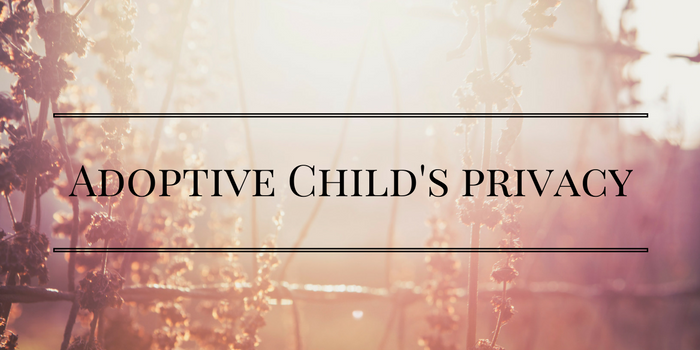 Recently, M had to have an appointment with a speech therapist for his adoption paperwork. The paperwork requires him to have all these appointments so Arizona can see where he’s at physically and mentally.  This will help determine a monthly subsidy post adoption. I figured sending him to the speech therapist at his school would be the most convenient. I called the school and spoke with the office and asked to speak to the Speech Therapist.

A day goes by and the Speech Therapist calls me back. I start talking to her about M’s past involvement with Speech Therapy in Arizona and why I need her to see him now. Before I could finish she interrupted me and told me she already saw him. I was confused because I did not understand why she would see him before talking to me because she had no idea why I wanted her to see M in the first place.

When I finished explaining why she needs to see M and what paperwork she needs to fill out for the State, she immediately tried telling me that M does not have a speech problem and she will not be diagnosing him with anything so that I could get more money.

It was dead silence on the phone for what felt like forever because I had NO CLUE how to respond! I NEVER had someone say that to me before. I then calmly informed her that this specific appointment does not determine MORE money. He is required to have it because he was in speech in Arizona and was diagnosed with a stutter prior to us fostering him. So the money is already there and allocated, he just needs an updated assessment for finalization.

She continued on, stating some more nonsense of how he doesn’t stutter and she knows this from talking to him for five minutes and that if he does stutter it is because of James and I. Yeah.. she really did say that. I immediately responded with him being diagnosed with a stutter before we even started fostering him at age 9. I also stated that it is clear she doesn’t have a history working with foster care students. Before I could finish she interrupted me and said she asked him questions on being adopted and if he would ever see him birth mom again. WAIT- HOLD ON – YOU WHAT?! She repeated herself and included that she also asked him how he felt about James and I, if we were adopting anyone else, and  she even asked questions about Chase! I was in utter shock.

Here we are, just a few months away from finalizing and I have some stranger asking him about his birth mother and seeing her again. I didn’t know what to say to her. I wish I could say that I called her out, but I actually just ended the call and sat there for a second thinking of what just happened.

I texted James and friend. I let them know what happened and to see if I was being crazy for being upset. Both of them thought it was completely ridiculous. So, I called the school. I spoke with the principal and let him know every detail of the conversation. I explained to him how we moved all the way from Arizona to this school district specifically so that M could have the best education. I told him that I wanted his privacy to be respected and that no adult is to have this conversation with him without our approval. Thankfully, the Principal totally agreed with me and ensured this will not happen again. He then put me in touch with the person who oversees the speech department and that person ensured me that it would not happen again and that they will handle this.

Honestly, I am not looking for this lady to be punished. I am not out to get her. What I am looking for is M’s privacy to be respected.  The school office knows he is in state care and that we are adopting him. They are suppose to know that information when you enroll a student. But, what they know beyond that is the parent’s choice. Not some nosey staff member who thinks they can ask a child questions.

It is rare that something like this happens. At least for us it is. If you have questions by all mean ask the parents, but ask when the child is not around. You never know what your innocent question can do to a child and the family if the child is around. Also, do not take it personal if the parents don’t answer. There are many layers to foster care and adopting. Unfortunately, for parents like James and I, no one really understands unless they have done it themselves. Even if they’re around us all the time, they still don’t get it. And that is ok, honestly. But, if we don’t want to answer a question or carry on a conversation about something specific, there is a legitimate reason.

I am so thankful that this is the only time we have had to experience something like this up until this point. Our family, friends, and community of people have been nothing but AMAZING and supporting. Clearly, I am not THAT private about adoption. I write about it weekly for anyone to read. But, there is still a line and when that line was crossed, I made it known that it was not ok and to never be crossed again.