You are here: Home / Adoption / Adopting an Older Child 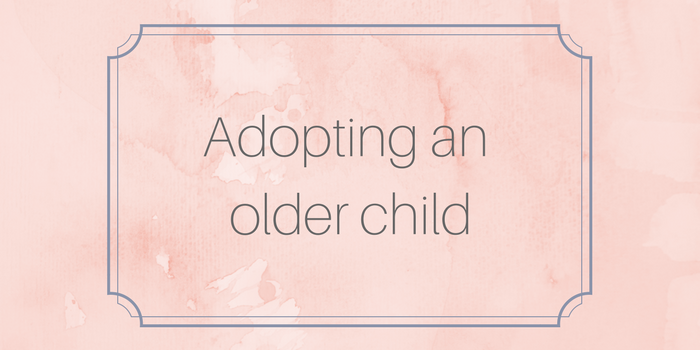 In the foster care world an older child is considered to be five and above. Most people want a toddler and or baby. I understand why. They want to be able to raise them from as close to the beginning as possible. They want the experience of raising a small child if they cannot have their own.

Since James and I can have children biologically, our heart has never been set on a certain age. It was more set on the idea of wanting to adopt. We also did not care about the gender or race. We really were a clean slate and open in this area.

There are benefits to adopting a child who is older. M is fully aware of everything that has happened. He is fully aware as much as he can be at his age. It is an open book and conversation in our house so as he ages he will continue to develop more and more of an awareness. He won’t have to wonder who his birth mom is, where she is, what she looks like, and why she placed him in care. Even though all that information can be given to a child who was adopted young, he has lived enough to know those answers first hand. There is no curiosity in that area.

As M gets older he may be curious on the “what if.” What if my mom didn’t place me in care? What if my mom was capable of raising me? Those are valid questions and a healthy curiosity that we will talk about and explore if that time comes.

There is the flip side of the child being older having lived through and experienced trauma. There are certain aspects that M has to deal with and face due to his early upbringing. We have to parent a certain way because of M’s life before us.

Since M was 9 when we first started fostering him we knew if there would be any medical conditions. Since some children are adopted so young the parents may not know of any conditions until they are a little older. When adopting a child from birth the child may have medical conditions due to their mother drinking or doing drugs during pregnancy. When a child is older there is knowledge on what that child is facing or dealing with. This will help a parent make a decision on if the child is right for their family.

James and I have seen children of all ages who need a family. We had a five year old girl who asked if she could live with us forever and call us mom and dad. We had a seventeen year old boy who would always ask for reassurance that we would be his parents. These kids want a family even if they are days away from being an adult. I think what most people forget is, just because someone turns eighteen doesn’t mean that need for family goes away. Who will they celebrate Christmas with for the next sixty years? Will there be anyone to call them on their birthday?

Even though James and I were open on the age, gender, and race, we do have standards though on the type of child we would adopt. I will write about that some other time because it will be enough for a post of it’s own.